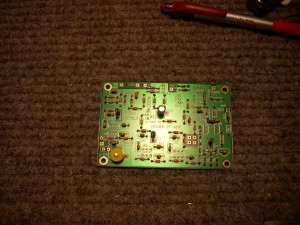 Well, for the time being, I’ve run out of parts to stuff into the W7ZOI Spectrum Analyzer project.  Soooo, since progress cannot be stopped – next up is another Wes Hayward design, the “Hycas” IF module kit (Hycas stands for Hybrid Cascode).  Discerning eyes will note I’ve yet to pop in the active devices as of this writing.  I bought TWO of these kits when they were available for some future project.  Since I have them, why not?  It looks like a great design, PERFECT for a homebrew receiver, don’t you think? 😉

Yes, I think THAT’S going to be the first “target” project toward a homebrew station – a receiver.  As the saying goes, “gotta hear ’em before you can work ’em.”  My intent is to build it with an eye toward transceiving with a companion transmitter.  After the Hycas IF is assembled, next will be an audio stage (which probably should have been the first section to build – DUH!), then a product detector and BFO (one output from the NT7S Si5351 triple-output oscillator kit – thanks, Jason), test each individually then together, THEN I can test the Hycas IF more easily.  That’s the plan anyway. 😉

In many ways, a receiver is more difficult to build than a transmitter, with VERY SMALL signals needing to be filtered and amplified versus a transmitter with “medium-level” signals that are filtered and amplified up to several dozen or hundreds of watts of RF output. For example, input levels from a dynamic mic are around -50dBV or .003 volts, almost LARGE when compared to a receiver which needs to pick out signal levels -110 dBm and smaller – that’s less than a few MICRO volts.

More on Hybrid Cascode:  this design amplifier is called Hybrid Cascode because it utilizes a JFET and a bipolar transistor connected in cascode (think of them as connected in series between input and output).  Check out this Wikipedia page for more detail: https://en.wikipedia.org/wiki/Cascode.