I keep making progress toward The Goal (see previous posts).  Here’s the fully populated Hycas IF board. Sharp eyes will note I left out the input impedance matching network (L1 and C1), as I haven’t decided yet on an IF frequency.  Current thoughts are running toward 4.9152 MHz.  Why?  Well… mostly because I have about 100 crystals in the junk box for that frequency.  😉 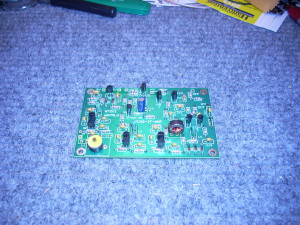 Since I already had it in hand, I built a neat little board from NT7S.  Jason recently started his own company called etherkit, and sells some very interesting kits.  Here’s the recently completed Si5351 Breakout Board from etherkit: 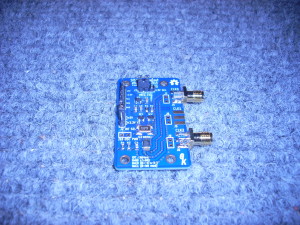 So what’s a Si5351?  The datasheet states, “The Si5351 is an I2C configurable clock generator that is ideally suited for replacing crystals, crystal oscillators, VCXOs, phase-locked loops (PLLs), and fanout buffers in cost-sensitive applications.  Based on a PLL/VCXO + high resolution MultiSynth fractional divider architecture, the Si5351 can generate any frequency up to 200 MHz on each of its outputs with 0 ppm error.”

And how does the Si5351 Breakout Board fit into The Goal?  As I mentioned previously, this should make a flexible LO and BFO for an HF receiver.  And all on ONE module.  Well, TWO modules including the Arduino controller.

BTW, there’s some scuttle-butt that maybe the Si5351 shouldn’t be a LO in a receiver, because the phase noise spec isn’t all that great.  Okay, but if I can find some decent high-frequency dividers, maybe I can run the LO at say 4X, and improve my lot with regard to phase noise.  Maybe?  Maybe too expensive and too complicated for a simple part.  🙁